Orange County Supervisor Shawn Nelson Tuesday questioned why four people, including one of his fellow board members, were needed to deliver a $100,000 reward to a San Francisco-based transient who helped authorities catch the alleged ringleader of a daring jail break.

The controversy was part of an effort by City News Service to obtain official travel expense reports, a public records request that was made in March. Those records have not yet been made available to the public.

Orange County Sheriff’s Department investigators, a representative of the sheriff’s public information office and Supervisor Todd Spitzer all made the March 17 trip to San Francisco to hand off the reward to Matthew Hay- Chapman, who tipped police there when he recognized a white van authorities suspected was stolen by the escaped inmates.

Hay-Chapman also spotted escapee Hossein Nayeri emerge from the van and walk into a McDonald’s restaurant. Officers quickly snatched up Nayeri and then found another of the Orange County Jail escapees, Jonathan Tieu, in the van.

The supervisors in March also awarded $15,000 apiece to Target employees Hazel Javier and Jeffrey Arana for their part in helping with the investigation.

Spitzer billed the taxpayers $519.15 for his plane fare and other expenses such as an Uber ride, breakfast, coffee and a bottle of orange juice from McDonald’s.

It’s not known how much the sheriff’s employees filed for expenses as the department has yet to respond to public records requests, which were first filed by City News Service March 23.

Lt. Mark Stichter, the sheriff’s department spokesman, defended sending three employees to San Francisco to hand off the check. The sheriff’s officials did not know Spitzer was also going on the trip.

“There was a check that was obviously a large amount of money so we wanted to ensure that Mr. Chapman got the check,” Stichter said.

Sheriff’s officials thought it was unsafe to send a check that large through the mail.

“We wanted to make sure it was given to him in a safe manner,” Stichter said, noting that sheriff’s officials did not know of a fixed address for Chapman.

“Supervisor Spitzer decided to go up there and be a part of handing him that check on his own,” Stichter said.

Spitzer had a picture of himself taken with Chapman that he included in a news release about the handoff March 17.

A member of the sheriff’s public relations team also went on the trip because “Mr. Chapman had a very good relationship with our office and we wanted to make sure we put him at ease with receiving the money,” Stichter said.

“He knew our names and knew who we were,” Stichter said. “He did not necessarily know who the investigators were.”

Nelson told City News Service that it was “ridiculous” that more than one person would have to get the money to Chapman. He also raised the possibility of wiring the money to San Francisco police and asking them to deliver the funds to Chapman as well as helping him set up a bank account.

“This is 2016, for goodness sake,” Nelson said. “There are too many other alternatives (to conveying money).”

Sending four people to deliver a reward check to someone “seems like extreme overkill,” Nelson said. “One was plenty. The idea that we needed to have more than one guy to handle a check is ridiculous.” 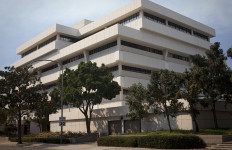 Robocall for OC ethics measure didn’t disclose who funded it→