A woman was injured and three other people were displaced by a fire that tore through a second-floor bedroom of a multi-unit townhome Tuesday morning in Santa Ana.

The flames were reported at 3:53 a.m. in the 600 block of South Harmon Street, according to Capt. Larry Kurtz of the Orange County Fire Authority. It took 26 firefighters 15 minutes to knock down the blaze, Kurtz said.

A woman in her 20s was taken to a hospital for treatment of non-life- threatening injuries, Kurtz said.

The American Red Cross was summoned to the scene to assist three displaced adults, he added.

Families staying in the other units were not affected by the fire, according to Kurtz. The cause of the blaze was under investigation. 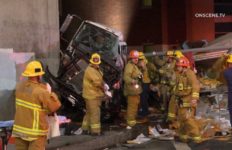