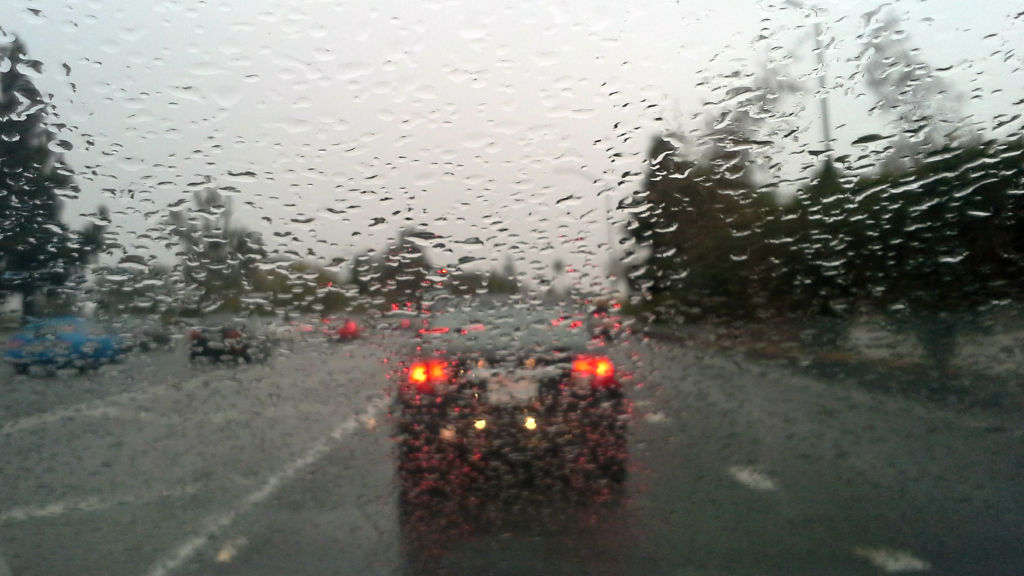 A heavy storm is expected to leave the region by Monday after dropping more than 3.7 inches of rain on the mountains above Azusa, and winds that topped 70 miles per hour on Sunday.

The line of strong storms, moving east, was in a line from Malibu to Burbank during the 1 p.m. hour, forecasters said. It moved east across L.A. County at about 50 miles per hour, with pockets of sun and rain alternating behind it.

Rain, heavy at times, had soaked the Los Angeles basin and mountains all morning. The strong thunderstorm cells popped up and moved in from the Oxnard area.

Winds of 74 mph were clocked near Lebec, 65 mph gusts were clocked in Malibu Canyon, and the wind hit 56 mph at Beverly Hills.

In West Hollywood, they dislodged scaffolding on a high-rise building construction site at 8800 Sunset Boulevard. Traffic was diverted off the Sunset Strip as the heavy metal bars dangled precariously, but no one was hurt.

In the San Gabriel Mountains east of Mount Wilson, 3.74 inches of rain had been observed by midafternoon at the Clear Creek Ranger Station. That area is just north of the fire area north of Azusa, but no mud flows were reported.

In the recently-burned mountains north of Santa Clarita, 1.97 inches of rain fell at the Pine Canyon fire patrol station on Francisquito Canyon Road. But that route remained open, as did nearby Lake Hughes Road.

A series of protective road closures were in effect over the weekend on mountain roads that are typically susceptible to rock slides, including the Angeles Forest Highway-Big Tujunga Canyon route between Palmdale and the La Crescenta area. Highway 2 remained closed due to winter storm damage between Islip Saddle — above Mount Wilson — and the Big Pines area near Mountain High Ski Area.

As the storm peaked at around 1 p.m., wind gusts of 66 miles an hour were reported in the mountains above Pacoima, as well as 64 mph at Porter Ranch and Topanga Canyon, and 56 mph at the Catalina Island Airport.

Blown-over trees — many weakened by years of drought — were a large problem all across the basin. The eastbound Ventura(134) Freeway had four of its five lanes blocked by a toppled tree at Bob Hope Drive in Burbank.

Two trucks collided in the rain on the Grapevine and came to rest blocking all four southbound lanes next to Pyramid Lake. Traffic was inching by on the center median.

The forecast was for the rain to exit the region by this evening or early Monday with rain and snow showers lingering in some mountain areas, forecasters said.

Snow levels will be at around the 7,000 feet level, dropping to as low as 5,500 feet by late today, according to the National Weather Service. As cold air moves into the region tonight, snow levels could drop as low as 2,500 on some mountain slopes.

That could lead to ice and snow on Interstate 5, which crests over the Grapevine , according to the NWS. Snow flurries began at 3 p.m., truckers told the National Weather Service Hanford office.

Small craft warnings were up along the coast, for surf up to nine feet forecast by late today, building to as high as 10 feet by Monday. A high surf advisory was in effect for the period covering 10 p.m. today to 3 a.m. Tuesday.

Gale force winds could generate breakers on top of the 10-foot swells, leading to occasional 15 foot waves on wets facing beaches, according to the NWS.

Drier conditions and warmer temperatures are expected next week.