The ports of Los Angeles and Long Beach are facing increased congestion this President’s Day weekend, with work partially halted amid a labor dispute between port employers and the dockworkers’ union.

As of Friday morning, as many as 27 ships waited at anchor outside the two ports, with just as many at berth, according to Port of Los Angeles spokesman Phillip Sanfield.

The shipping yards — “chock full” of cargo — are 95 percent full, well beyond the “efficient” ideal of 80 percent, Sanfield said.

The ports are at a “breaking point,” and there are fears this latest labor dispute could drive companies like Walmart, Target and others to shy away from West Coast ports, opting instead for Canadian, Gulf Coast and even East Coast ports, he said.

Lee Peterson, spokesman for the Long Beach port, echoed this worry, saying that once the dispute is resolved, “we would hope to try to win back the business we are losing, but it will be difficult.”

Sanfield noted the amount of cargo from Asia will likely taper off for about two weeks when production shuts down in observance of the upcoming Lunar New Year holiday on Feb. 20. This could allow terminal operators to “get some catch up work done, clear up docks,” he said.

Under an order by the Pacific Maritime Association, which represents port employers, vessel loading and unloading activities at the ports were suspended Thursday — which was Lincoln’s birthday — and will be suspended again today, Sunday and Monday — which is Presidents Day — so companies will not be forced to pay holiday and weekend salaries to union workers, whom they have accused of slowing port operations during the contract dispute.

The International Longshore and Warehouse Union has repeatedly denied taking part in a coordinated effort to slow port operations. Union officials have said employees are not given enough training opportunities so there are not enough qualified employees who can come to work.

The two sides are engaged in talks facilitated by a federal mediator, who is speaking to each side separately, according to ILWU spokesman Craig Merrilees.

Congestion at the ports in recent months has also been attributed by the union to industry-wide changes that include larger ships dropping off and picking up more cargo at the ports.

According to the PMA, longshore workers and clerks would be paid between $54 and $75 an hour on the holiday and weekend days, while foremen would receive $77 to $92 an hour.

“PMA members have concluded that they will not conduct vessel operations on those dates, paying full shifts of ILWU workers such high rates for severely diminished productivity while the backlog of cargo at West Coast ports grows,” according to a statement from the association.

Vessel operations also were halted last weekend. The action by the PMA affects not only the Los Angeles/Long Beach complex, but all West Coast ports.

The ILWU blasted last weekend’s halt of vessel activity as “crazy and irresponsible.” 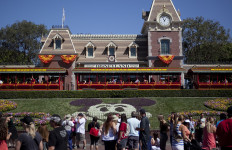