Details of the pact were not immediately available.

The tentative deal came in the face of a deadline imposed by U.S. Labor Secretary Thomas Perez, who has been in San Francisco to take part in the negotiations since Tuesday. He said late Thursday that if no deal was reached today, the parties would be summoned to Washington, D.C.

“Finally, we have a port agreement!” Long Beach Mayor Robert Garcia proclaimed on his Twitter page after being informed of the tentative deal.

The Pacific Maritime Association, which represents port management, and the International Longshore and Warehouse Union, the representative for dockworkers, had been in agreement on on major aspects of the contract — including health care and pay — but there was a lingering disagreement over an arbitrator who has a key role in determining how the future contract would be implemented and enforced.

The months-long labor talks grew increasingly contentious in recent weeks, with the PMA issuing orders to halt the loading and unloading of ships at all West Coast ports during the past two weekends.

The employers contended workers have been conducting an illegal slowdown that has driven down productivity, and they did not want to pay weekend and holiday salary rates for work that is not being done. The ILWU has denied any slowdown.

The PMA also accused the ILWU of attempting to dismiss an arbitrator who found the union guilty of the illegal work slowdowns, with the union seeking a provision that would allow just one party to remove an arbitrator.

California’s two U.S. senators sent a joint letter Wednesday to the PMA and ILWU, urging them to reach an agreement to prevent damage to the economy.

“Every day that goes by without a resolution only adds to the economic pain for the West Coast and the entire country,” Sens. Barbara Boxer and Dianne Feinstein wrote. “This cannot continue. The consequences of failing to resolve this dispute immediately would be devastating to our economy and to the millions of people who work hard every day for agricultural producers, manufacturers and other businesses, both large and small, in California and around the world.”

The fallout of the labor dispute was reflected in numbers released Wednesday by the Port of Long Beach that showed container volumes down in January by 18.8 percent compared with the same month last year. 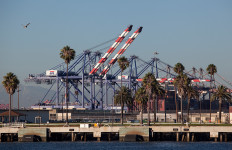