On the heels of a unionization vote and a shakeup in newsroom management, the Los Angeles Times could soon have an ownership change, with a report Tuesday that Chicago-based Tronc plans to sell the paper to health-care billionaire Patrick Soon-Shiong.

Citing people familiar with the plan, The Washington Post reported that the expected sale to Soon-Shiong, who is a major shareholder of Tronc., will also include the San Diego Union-Tribune, which Tronc purchased in 2015.

Tronc, previously known as Tribune Co., purchased The Times in 2000. Soon-Shiong is a major shareholder of Tronc.

The Times later reported that the deal is nearing completion and would be worth nearly $500 million. Tronc is expected to use the sale proceeds to further its “digital strategy” at its remaining papers, including the Chicago Tribune, Orlando Sentinel and Baltimore Sun, The Times reported.

News of the reported sale spread like wildfire through The Times’ downtown office. One staffer posted on Twitter that there were cheers and screams in the newsroom.

The newsroom has been in turmoil in recent weeks. A new editor, Jim Kirk, was named in late January following rising concern by staffers over the direction of newsroom management and concerns about the blurring of the line between the news and business departments. Kirk replaced Lewis D’Vorkin, who was moved to the position of chief content for digital and mobile customers.

The paper’s publisher, Ross Levinsohn, was placed on unpaid leave following revelations he was a defendant in two sexual harassment suits while working at other companies prior to joining The Times.

Most notably, newsroom staffers voted overwhelmingly last month to unionize for the first time in the paper’s 136-year history.

Soon-Shiong is the founder and CEO of Culver City-based NantHealth. A representative for Soon-Shiong told the Post he was traveling and unavailable for comment on the report. 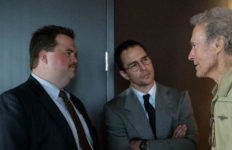