Herschel Reynolds, a 20-year-old former Marine Corps driver, and his 19- year-old passenger, Isaiah Young, are facing one count each of first-degree residential burglary and fleeing a pursuing peace officer’s vehicle while driving recklessly, both felonies.

They are additionally charged with two misdemeanor counts of hit-and-run driving resulting in property damage.

Young appeared in a Bellflower courtroom Monday and pleaded not guilty. He is due to return to court in Norwalk on April 18, when a date is expected to be set for a preliminary hearing to determine whether there is enough evidence to proceed to trial.

In the meantime, Young remains jailed on $50,000 bail and has another case pending with an additional $30,000 bail, according to Sheriff’s Department records.

Reynolds posted bail Monday and is set to be arraigned in Bellflower on May 10.

The defendants are accused in a burglary that was reported about 1:25 p.m. Thursday in the 12300 block of Charlwood Street in Cerritos. A woman drove up to her home and found a car she didn’t recognize in the driveway.

When she honked her horn, the car sped away. She found the back door of her home smashed and items missing.

A neighbor gave deputies a description of two young men in a dark blue Ford Mustang, which was spotted by a sheriff’s aero unit heading from the westbound Artesia (91) Freeway to the northbound Long Beach (710) Freeway.

During the chase that followed, the men put the Mustang’s convertible top down, even though a steady rain was falling. The driver did “donuts” on Hollywood Boulevard, drove the wrong way on rain-slick streets and taunted pursuers.

At one point, the Mustang was cut off by a TMZ tour bus in Hollywood and the passenger threw something at the bus as the driver steered the Ford around it.

Even when the front right tire of the Mustang was shredded, possibly from a spike strip, the driver kept going. During the pursuit, the Mustang appeared to clip another vehicle and still kept on.

The driver ultimately exited the Harbor (110) Freeway at Adams Boulevard and drove to the area of Central Avenue and 51st Street in South Los Angeles, where the driver stopped and got out of the Mustang and the passenger stood up inside the car, calmly awaiting the arrival of authorities.

Some of the onlookers talked to and high-fived the suspects, even taking selfies with the two men before deputies arrived and took them into custody without incident.

During the chase, some onlookers cheered Reynolds and Young on as they passed by and the two alleged burglars appeared to respond with fist pumps.

Pentagon officials said Reynolds served with the 1st Marine Logistics Group at Camp Pendleton as a motor vehicle operator but was discharged in January, with authorities saying “the character of his service was incongruent with the Marine Corps’ expectations and standards.”

If convicted as charged, Reynolds and Young face a maximum possible sentence of six years and eight months in prison, according to the District Attorney’s Office. 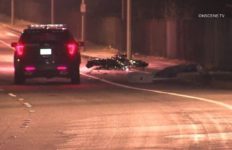