The Los Angeles Times is planning to contest a federal judge’s order requiring the Times to remove information from an article that described a plea agreement between prosecutors and former Glendale police detective John Saro Balian, accused of collaborating with organized crime figures.

The agreement was supposed to have been filed under seal, but it was mistakenly made available on PACER, a public online database for federal court documents, the Times said Saturday night.

Responding to the order from U.S. District Judge John F. Walter, Times editors revised the article to eliminate information about the sealed document, but said it intends to contest the ruling.

“We believe that once material is in the public record, it is proper and appropriate to publish it if it is newsworthy,” Times Executive Editor Norman Pearlstine said.

Kelli Sager, an attorney representing The Times, said the First Amendment includes a strong presumption against government actions that prevent someone from speaking or publishing information.

The article, by reporter Alene Tchekmedyian, was posted Saturday morning, before the judge made his ruling.

“Typically, courts take into account if information was already published. Where it is no longer secret, the point of the restraining order is mooted,” Sager said. “To order a publication to claw it back doesn’t even serve the interest that may be intended.”

Balian pleaded guilty July 12 to three counts: lying to federal investigators about his links to organized crime, accepting a bribe and obstructing justice by tipping off a top criminal target about an upcoming federal raid, information printed in several other news outlets as well as the Times.

The 45-year-old Balian — a former spokesman for the Glendale police — came under the FBI’s suspicion after confidential informants told authorities about Balian’s alleged ties with the Mexican Mafia and Armenian organized crime, according to a variety of sources.

In one case, an informant alleged that Balian tipped off a gang member to a law enforcement sweep, the Times said.

The informant also alleged that Balian gave him locations of marijuana grows and drug stash houses at which law enforcement was planning to execute search warrants, according to the Times.

The informant said he and Balian communicated using hard to trace “burner” cellphones they used only with each other for no more than a month at a time.

When confronted by federal agents in four interviews over the past year, Balian allegedly lied to authorities about his ties to organized crime, court papers showed.

Balian — being held without bail — remains on unpaid leave. 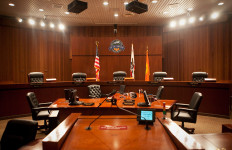