Orange County supervisors approved a resolution Tuesday supporting a ballot initiative that would make it harder for some inmates to get paroled and add more crimes to a list of serious felonies requiring longer prison terms.

The supervisors voted to support the Reducing Crime and Keeping California Safe Act of 2020. The initiative was crafted in response to Propositions 47 and 57, which made some prisoners eligible for early parole if they were convicted of a nonviolent felony and allowed for the reduction of some felonies to misdemeanors.

The initiative would also update AB 109, which was aimed at reducing prison overcrowding as mandated by federal courts, to allow for the revocation of parole for anyone who violates the terms of release for a third time.

The initiative also aims to restore DNA collection from convicts for theft and drug crimes that had been eliminated with Proposition 47.

Sheriff Don Barnes and Assistant District Attorney Shawn Nelson asked the board to approve the resolution.

Barnes said the initiative address the “negative impacts of (Propositions) 47 and 57.”

The sheriff added that “currently violent crime is narrowly defined” in the law.

“Crimes such as the sex trafficking of children, rape of an unconscious person, assault of a police officer or firefighter or domestic violence are not included” on the list of violent felonies requiring a convict to serve 80% of a sentence, instead of 50%, behind bars, Barnes said.

Thieves convicted of multiple crimes could be charged with “serial theft” after three convictions of stealing more than $250. Parole boards would also consider a convict’s entire criminal history instead of the most recent list of crimes, Barnes said.

“This initiative has my support because it addresses shortfalls in the law that hinders law enforcement’s ability to fight crime,” Barnes said.

Orange County Supervisor Andrew Do said he has seen “a lot of changes in the criminal justice system” since he started work as a public defender three decades ago.

“Some for the better,” he said.

But while he sees why Propositions 47 and 57 were passed, he backs the initiative to tweak them.

“For a long time people, especially people of color, were incarcerated at a disproportionate rate,” Do said. “So I understand a lot of the motivation that led to Propositions 47 and 57… But I think the proverbial pendulum has swung too far away from public safety.”

Too many felons who used to do time in prison are now in the local jails, leading to a “more sophisticated” criminal class in local lockups, Do said.

Supervisor Don Wagner noted that when he was in the state Assembly he argued against Propositions 47 and 57.

“The public, I think, would be shocked to look at the list of crimes that Sacramento deems not violent,” Wagner said. “It’s shocking to know that the rape of an unconscious person is not considered a serious felony. Can you say that with a straight face?”

Expanding DNA collection will not only “put more people in jail that deserve to be taken out of society,” but it will also “allow us to better investigate crimes to clear innocent people,” Wagner said.

Former Gov. Jerry Brown previously blasted the initiative — which had been originally planned for the 2018 ballot but was delayed until 2020. Brown called it a “flawed” measure that would “cost taxpayers tens of millions of dollars and endanger public safety by restricting parole and undermining inmate rehabilitation.” 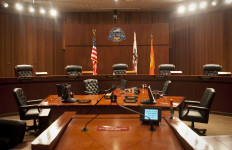