A Lancaster man who allegedly shot and wounded a woman during an attempted carjacking in her Stevenson Ranch driveway was set to be arraigned Wednesday on attempted murder and other counts stemming from an alleged robbery spree last week, in which two others are also facing charges.

Jeremy Hernandez, 19, is charged with one count each of attempted murder, assault with a firearm and attempted first-degree ATM robbery, two counts of attempted carjacking, five counts of attempted robbery and 14 counts of second-degree robbery, according to the Los Angeles County District Attorney’s Office. He is also facing allegations of using a handgun and causing great bodily injury.

The robberies occurred in the Antelope Valley between March 16-21, according to Deputy District Attorney Ryan Williams.

Hernandez allegedly shot a 45-year-old woman in her driveway during an attempt to steal her vehicle on March 21, according to the prosecutor.

Martinez and Crews were arrested last Friday by the Los Angeles County Sheriff’s Department, while Hernandez was arrested Monday, according to jail records. All three men — who were charged Monday — remain jailed.

Hernandez could face a potential maximum sentence of 127 years to life in state prison if convicted as charged, according to the District Attorney’s Office.

Martinez could face more than 29 years in state prison and Crews up to seven years behind bars if found guilty of all of the charges against them, according to prosecutors. 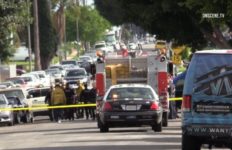 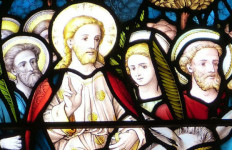