The board that oversees the Department of Water and Power Tuesday unanimously approved a plan to raise customer water rates over the next five years to help pay for upgrades on the city’s aging pipe system.

The Board of Water and Power Commissioners voted 4-0 in favor of the rate hikes, with one member absent. The proposal now goes to the Los Angeles City Council for consideration.

The typical single-family household could see bills go up by 4.76 percent, or $3 per month, each year, for the next five years, under the rate hike plan.

A monthly bill of $57.79 for the typical residential water user would increase to an average rate of $72.90 at the end of the five years, according to an example in a staff report.

Commercial water users would see monthly bills go up between $3 and $60 annually.

The rate increases have been billed as a way to raise money to replace or fix DWP’s aging system of water pipes.

Mayor Eric Garcetti backed the plan this week, saying that while “no one likes to raise rates,” the “price of inaction will be much higher for all of L.A.’s residents.”

Garcetti said the average increase for the typical water user would be minimal over five years and keep the DWP’s rates among “the lowest in the region.”

He also pointed to provisions that would create a measuring stick for whether the rate increases result in the promised improvements, with a formal review in two years to see if changes need to be made.

Garcetti’s backing of the plan came a few days after the Office of Public Accountability, headed by ratepayer advocate Fred Pickel, issued a report expressing the opinion that the LADWP’s water rate proposal is “just and reasonable.”

The report also found that while the purpose of the rate increase is to help upgrade aging pipelines, “the pace is too slow for the desired long-run replacement cycle.”

The report also raised a concern that “staffing levels will be inadequate for the growing levels of planned capital project expenditures, in part due to the anticipated personnel retirements and constraints on outsourcing.”

The average or low water user is likely to see bills grow 4 percent each year, while heavy water users could see bills go up by 7 percent per year, with the biggest increase in the first of the five-year plan, the report said

Rates could be higher than anticipated if current drought conditions continues, the report says. A typical single-family home could see a bill of $62.89 per month go up to $68.73 in one year, then to $70 per month after three years. In the final year, the bill could go to $74, according to the OPA’s report. 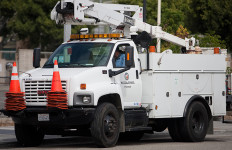