Tom Steyer isn’t overlooking any demographic in his impeachment drive.

Just in time for President Trump’s visit to California, the billionaire Democratic donor has released a TV commercial in Spanish.

“The commercial is brief and explains, in voices of diverse Latin people, the reasons for a possible impeachment trial against President Trump that, according to the constitution and the laws of the country, could occur in the United States Congress,” said Telemundo.

The commercial was to begin airing Tuesday in markets such as Las Vegas, Phoenix, Miami and Los Angeles, said the Spanish news outlet.

The TV spot invites the audience to visit the “Need to Impeach” campaign page and place their name and email address on Steyer’s list.

As of Tuesday morning, 5.07 million have signed the online petition, the site says. 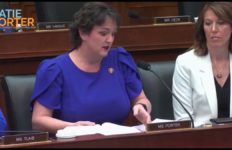