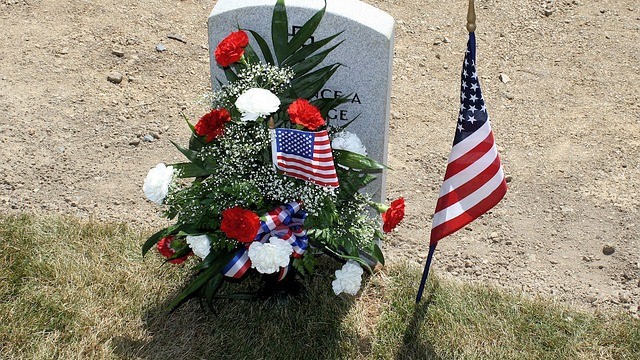 Memorial Day in Los Angeles County Monday will include removing ivy from a wall at Rosie the Riveter Park in Long Beach that will have a list of the names of the armed forces members who gave their lives in service to the country since the Sept. 11, 2001 terrorist attacks.

The wall will be unveiled on Memorial Day 2016, according to Laura Herzog, founder and CEO of Honoring Our Fallen, a Cypress-based nonprofit organization which conducts programs helping the children and spouses of service members killed in the line of duty.

“The wall will be a place where families and friends can come to visit, do a name rubbing, place a flower and see their loved ones sacrifice is not forgotten,” Herzog told City News Service.

“For some families in California, this wall will be the closest place they can come as their hero is buried out of state.”

A memorial attended by active duty military members and families of those killed will be held at 10 a.m., preceding the ivy removal.

Memorial Day will also be marked in Los Angeles County with a parade in Canoga Park, a walk at the West Los Angeles VA Campus benefiting homeless veterans, a Memorial Day Mass and a ceremony aboard the USS Iowa.

The 26th annual Memorial Day Parade organized by the Canoga Park-West Hills Chamber of Commerce will begin at 11 a.m. at Sherman Way and Owensmouth Avenue and head east on Sherman Way to Cozycroft Avenue.

More than 1,000 runners and walkers are expected to participate in the fifth annual Walk for Warriors at the West Los Angeles VA Campus in Brentwood. The 5-kilometer walk will begin at 8 a.m. It raises funds to help Los Angeles County’s homeless veterans, those at risk of homelessness, and their families.

What is billed as the Southland’s largest annual Memorial Day observance will be held at Green Hills Memorial Park in Rancho Palos Verdes. The 90- minute program will begin at 10 a.m.

A half-scale replica of the Vietnam Veterans Memorial will be on display. The observance will also include aerial flyovers; skydivers; a parade of colors by members of the armed forces; musical performances; a wreath-laying and 21 gun salute; and the release of 100 doves.

Archbishop Jose H. Gomez will celebrate a special outdoor Memorial Day Mass at 10 a.m. at the Queen of Heaven Cemetery in Rowland Heights. The Mass will include a moment of silence while a bugler plays “Taps.” White doves will be released before the Mass ends.

Rose Hills Memorial Park in Whittier will begin its 95th annual Memorial Day Observance at 11 a.m. The observance will feature a performance by the 40th Infantry Division Band and a keynote address by Brig. Gen. Emory J. Hagan III, the commanding general of the California State Military Reserve.

It will also include a vintage plane flyover, a military vehicle display, a remembrance tree and children’s activities.

The 68th annual 24-hour Memorial Day Vigil at the war memorial in Cinco Puntos on Cesar E. Chavez Avenue in Boyle Heights will conclude at 10 a.m. At least one person will be standing guard throughout the vigil, which began at 10 a.m. Sunday.

El Monte’s Memorial Day Ceremony at Tony Arceo Memorial Park will begin at 9 a.m. It will include a tribute to prisoners of war and troops missing in action, a presentation of a Memorial Day wreath, a 21-gun salute, a performance of “Taps,” and a keynote speech by U.S. Army Capt. Joseph P. Davis.

Inglewood’s 67th annual Memorial Day Service will begin at 11 a.m. at Inglewood City Hall. The service will include the playing of “Taps,” presentation of colors, remarks by military guests and a memorial wreath laying service.

A Memorial Day Observance at the Pioneer Memorial Cemetery in Sylmar will include a special tribute to the five Civil War veterans buried at the 141- year-old graveyard.

The 150th anniversary of the of the Civil War will be the theme of the 11 a.m. observance, with songs and vignettes from “Mine Eyes Have Seen the Glory — Reflections on the Civil War.”

A Memorial Day ceremony will be held aboard the Battleship Iowa, docked in the Port of Los Angeles, beginning at 1 p.m. Following the ceremony, Bernie Kopell will share stories from his naval and acting careers. Kopell was stationed aboard the USS Iowa during his active duty naval service from 1957- 59.

Live performances of “Veteranos: A Legacy of Valor,” a theatrical tribute to the Latinos who have fought and died for the U.S., will be presented at 4:30 and 7:30 p.m. at Plaza de la Raza in Lincoln Heights. A question-and- answer session will follow.

Net proceeds will benefit the Eugene A. Obregon Memorial Foundation, a nonprofit organization raising funds to complete the Medal of Honor monument at Father Serra Park in downtown Los Angeles.

Obregon was a Los Angeles native who enlisted in the Marine Corps when he was 17 and was awarded the Congressional Medal of Honor for sacrificing his life to save that of a wounded comrade during the Korean War.

Memorial Day at the Los Angeles Dodgers-Atlanta Braves game at Dodger Stadium will be marked by a flyover of three vintage military aircraft from the Palm Springs Air Museum and a U.S. Army color guard presenting the colors.

The ceremonial first pitch will be thrown by five members from each of the five branches of the military. Robert Friend, a member of the famed all- black World War II Army Air Corps unit the Tuskegee Airmen, will officially start the game by declaring, “It’s time for Dodger baseball.”

The Dodgers will wear uniforms with the team name in camouflage and their caps will have camouflage bills. All the net proceeds from sale of the jerseys and caps will be donated to the Welcome Back Veterans program, which provides grants to university hospitals throughout the nation to treat veterans suffering from post-traumatic stress disorder and traumatic brain injury.

“As Angelenos take a break and spend time with family, I hope they also take a moment to remember those brave men and women who wore our nation’s uniform and put themselves in harm’s way to defend our freedoms,” Mayor Eric Garcetti said.

Los Angeles County Board of Supervisors Chairman Michael D. Antonovich said, “On Memorial Day, we remember and pay tribute to fallen heroes and their families, to appreciate the blessing of liberty and recognize the power and virtue of their sacrifice.

“And in their honor, we resolve to be ever vigilant in preserving liberty and peace throughout the world.”

Senate President pro Tempore Kevin de Leon said he was “eternally thankful to the courageous men and women of our armed forces who made the ultimate sacrifice to serve and protect our great nation, from the first battle at Lexington to the global fight against terrorism.

“My thoughts are with the families and loved ones who have endured unfathomable pain and sadness,” said de Leon, D-Los Angeles. “No words or deeds can replace what you have lost. This Memorial Day, may you feel the profound gratitude of our nation and take comfort in the solemn pride of patriotism.”

Senate Minority Leader Bob Huff reminded the public that “Memorial Day is not to be confused with Veterans Day,” which is observed on Nov. 11

“Many Americans celebrate Memorial Day. Some remember with solemn services. Many people visit cemeteries and memorials. American flags are placed on each grave in national and local cemeteries.

“The traditional observance includes raising the U.S. flag to the top of the staff, then slowly lowering it to the half-staff position where it remains until noon, when it’s raised to a full staff position once again.”

In his weekly radio address, President Barack Obama called Memorial Day “a time to pay tribute to all our men and women in uniform who’ve ever given their lives so that we can live in freedom and security.”

“We are the Americans they died to defend,” Obama said. “So what we can do — what we must do — is fulfill our sacred obligations to them, just like they fulfilled theirs to us.

“We have to honor their memory. We have to care for their families and our veterans who served with them. And as a nation, we have to remain worthy of their sacrifice, forever committed to the country they loved and the freedom they fought for and died for.”

What became Memorial Day was first observed on May 30, 1868, as Decoration Day, a time for the nation to decorate the graves of the Civil War dead with flowers.

It was established 25 days earlier by Maj. Gen. John Logan, national commander of the Grand Army of the Republic, an organization of veterans who fought for the Union in the Civil War. It is believed that date was chosen because flowers would be in bloom all over the nation.

By the end of the 19th century, Decoration Day ceremonies were being held on May 30 throughout the nation. After World War I, the holiday was changed to honor Americans who died fighting in all wars.

The term Memorial Day was first used in 1882, became more common after World War II and declared the official name by federal law in 1967.

Memorial Day had been observed on May 30, until being moved to the last Monday in May in 1971 under terms of the Uniform Monday Holiday Act, which became law in 1968.