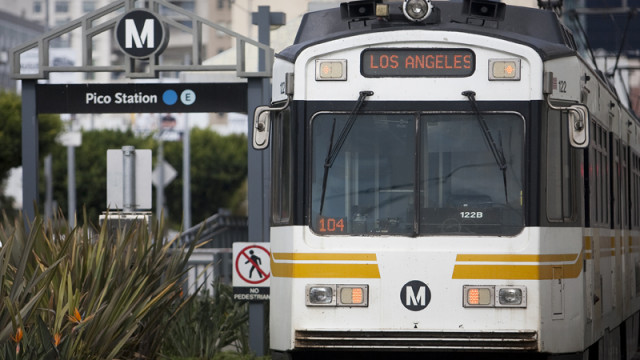 More than two dozen intersections along the Blue Line have been outfitted with physical barriers, pedestrian gates and other upgrades to improve safety throughout the 22-mile route, Metro officials announced Thursday.

The $30 million in improvements made at 27 intersections along the line also include signage, wider walkways and accessibility features for Metro riders with disabilities.

“These upgrades are part of the ongoing effort to keep our first and busiest rail line at the highest level of safety,” Metro board Chair John Fasana said. “The Metro Blue Line began service in 1990 and these improvements keep the Blue Line up-to-date with evolving standards.”

The Blue Line serves the southern portion of Metro’s rail system and runs through the cities of Los Angeles, Compton and Long Beach, as well as unincorporated parts of the county.

The safety improvements are part of a series of overhauls on the line that includes new rail cars and power station replacements.

At a news conference in Long Beach, Mayor Eric Garcetti, who sits on the Metro board, said the latest improvements are “part of a package we launched in 2014 for this line, investing $1.2 billion to address wear and tear and improve safety.”

Metro officials also promoted Measure M on Tuesday’s ballot, saying the sales tax measure would pay for further improvements on the Blue Line, including grade separation at the Wardlow Station.

“Every day we strive to make the Metro system better, safer and more convenient,” Metro CEO Phillip Washington said. “This is a tangible reminder of how investments made by the community benefit our community.”

Garcetti released a statement saying investment into future improvements along the Blue Line is needed.

“Workers, students, tourists — tens of thousands of commuters rely on the Blue Line every day, and they deserve the more reliable and convenient service these improvements will bring to one of our most active rail lines,” he said.

“At the end of the day, we want to bring people throughout L.A. County closer together — from Long Beach to L.A. and everywhere in between,” he said. “These improvements, coupled with upgrades we want to make to the Wardlow Station and the most congested portions of the 710, will help us build the connectivity our region needs and the world-class transportation system we deserve.”