The former fiancee of a onetime UCLA offensive lineman who lost part of his left leg in a 2012 motorcycle accident testified Thursday that the pressures of being the man’s caretaker eventually led her to call off their wedding plans.

“It just became too much,” said Kelli Tennant, who was engaged to Amir “Nick” Ekbatani. “I’m trying to build my career at the same time I’m trying to keep this guy alive. I just couldn’t handle it myself anymore.”

Tennant, a 6-feet-2 inch former USC women’s volleyball player, said Ekbatani also sometimes talked in a depressed, even suicidal way, expressing such thoughts to her as, “I have no value, I have no worth.”

According to testimony in the trial of his Los Angeles Superior Court lawsuit against the state of California and Caltrans, Ekbatani was riding his motorcycle north on Pacific Coast Highway in Redondo Beach on July 14, 2012, when a southbound taxi van driven by Mesfin Kinfu failed to yield the right-of- way when turning left onto Diamond Street, colliding with the motorcycle.

Ekbatani’s lawyer, Garo Mardirossian, said the intersection is considered “skewed” because Diamond Street crosses PCH at a diagonal so severe that Caltrans is obligated to take extra precautions to protect motorists. He said motorists traveling south on PCH go up a gradual incline that does not allow them to fully view oncoming traffic until they reach the intersection and that the roadway would be safer with a left-turn signal. Attorneys for the state say the intersection is safe and that the taxi driver’s careless driving caused the accident.

Tennant, 28, told jurors she began dating Ekbatani a short time before his accident and that she was impressed when she first saw him.

“He walks in and he looks perfect,” she said. “We just had the best conversation. He cared so much about kids. I felt really good about who he was.”

Tennant testified that Ekbatani proposed to her in December 2013. She said she accepted, but that no wedding date was ever set.

She said the two lived together and that she gave up many freelance job opportunities to take him to the hospital for his numerous surgeries. The time she devoted to him took its toll, she said.

“As much as I loved and cared about him, the transition from girlfriend and fiancee to caretaker was difficult,” she said. “I had to say no to more job opportunities than I would have liked. I couldn’t travel or do events like I wanted to.”

Tennant said Ekbatani’s depression stemmed in large part from his trouble dealing with the fact that he could no longer be the active sportsman he once was. She said she did her best to counsel him when he became depressed. She said she encouraged him to take up music to take his mind off his situation, but that his mediocre singing talents later led her to encourage him to get vocal lessons.

Tennant narrated as Mardirossian showed images of a Ekbatani from the time he was a boy, his days as a player at South High in Torrance, his UCLA career and later during an ESPN broadcasting stint.

Ekbatani underwent 13 surgeries on his left leg and always carries a backpack with him that contains supplies to help him tend to that limb, Mardirossian said. He obtained an MBA from USC after the accident. 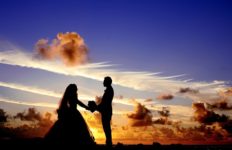 Looking for a Valentine’s Wedding? Get in Line→