Hawthorne-based SpaceX Wednesday will attempt the first commercial launch of its Falcon Heavy, billed as the most powerful rocket ever assembled, to carry a communications satellite into orbit from Cape Canaveral in Florida.

The launch, scheduled for 3:35 p.m. California time, will be the second flight for Falcon Heavy. The massive rocket, which is actually an array of three of the company’s Falcon 9-type rockets, made its debut in February 2018 when it launched a cherry-red Tesla roadster with a “Starman” space-suited driver propped behind the wheel in a test mission.

Wednesday’s launch, however, will be the first commercial use of the Falcon Heavy. The rocket is scheduled to carry a 13,200-pound Arabsat-6A satellite into orbit, providing communications services to areas of Africa, Europe and the Middle East.

The 230-feet-tall, 27-engine Falcon Heavy is essentially triple the size of SpaceX’s traditional Falcon 9 rockets. According SpaceX, the liftoff thrust of Falcon Heavy is roughly equivalent to 18 full-powered 747 jetliners.

SpaceX founder Elon Musk has called Falcon Heavy “the most powerful rocket in the world by a factor of two and the highest payload launch vehicle to reach orbit after the Saturn V moon rocket.”

The Falcon Heavy includes a massive center rocket booster, coupled with two side rocket boosters. The most visually spectacular part of last year’s Falcon Heavy launch occurred when SpaceX successfully landed the two Falcon 9 side rockets simultaneously back on land at Cape Canaveral following the launch. The company attempted, but failed, to recover the center booster rocket on a barge floating in the Atlantic Ocean.

SpaceX has become known for recovering its rockets for reuse in future missions. The company will again attempt to recover all three of the rockets in the array on Wednesday — two on land and one at sea.

The Arabsat-6A launch had been scheduled for Tuesday, but SpaceX pushed back the launch by a day due to bad weather in Florida. As of Tuesday afternoon, SpaceX was predicting an 80 percent chance of favorable weather for the Wednesday launch. 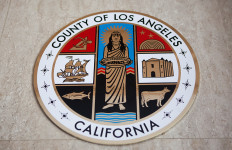