Fire crews Monday rescued an injured 22-year-old woman who fell from a cliff near the ocean in San Pedro.

Firefighters responded to the scene in the 4100 block of South Gaffey Street, near Paseo Del Mar, about 2:15 p.m., according to the Los Angeles Fire Department.

The woman, who had non-life threatening injuries, was rescued with a hoist operation, the fire department reported. The height of the cliff was not immediately available. 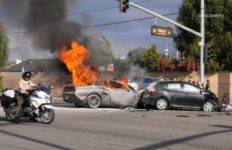