Activists and American Civil Liberties Union officials went before the Board of Supervisors Tuesday and sought an explanation on what the county plans to do in response to an ACLU report issued in March that was critical of Orange County’s homeless shelters.

The activists held a protest and then dozens attended the supervisors’ weekly board meeting and demanded the county do something to address the issues raised in the report, contending its leaders’ response has been lackluster at best.

Eve Garrow, one of the authors of the ACLU report issued in March, said she wants the supervisors to do more to address the problems with the shelters and to build more affordable housing in the county.

“We received a letter from the county calling some of the findings unfounded because we relied on anonymous sources, who feared retaliation if they spoke out,” Garrow said. “The response was completely inadequate.”

Orange County Supervisor Andrew Do said the county “takes issues with the accuracy of that report.”

He added, “We have no way of responding to isolated incidents in which we have no way of validating the circumstances and any remedial steps that were taken once it was brought to our attention.”

In the March report, the ACLU alleged that a year-long investigation showed “toxic and unsafe conditions” in three shelters — the Courtyard in downtown Santa Ana, SAFEPlace in Santa Ana and Bridges at Kraemer Place in Anaheim.

The investigation found there were too few toilets, broken toilets that went unrepaired for months and “raw sewage flowing from porta potties.” The report also documented showers with no temperature control, rodent and insect infestations, a shortage of soap, lack of heat during the winter and flooding during rainstorms.

The report also addressed allegations of rampant sexual harassment of female transients from male staffers, with some accused of offering “special treatment in exchange for sex.”

U.S. District Judge David O. Carter, who is overseeing various lawsuits challenging anti-camping laws in the county, has said he was aware some corners would have to be cut in terms of requirements for access for the disabled in the shelters, but that it was more important to get transients off the streets and in shelter.

Attorney Brooke Weitzman, who is part of the legal team challenging the enforcement of anti-camping laws, said, “Everyone agrees there are problems with the shelters, especially the Courtyard. It’s no surprise to anyone that this temporary shelter was inadequate.”

Weitzman pointed out that many of the problems pointed out in the ACLU report were detailed in the federal suits before Carter “and are part of the settlement negotiations … No one is denying the Courtyard is terrible and not appropriate, but the county has recognized that and has taken steps to alleviate the numbers (of transients there).”

Following the meeting, Do wondered why the complaints weren’t taken to Carter at one of his hearings.

“With respect to the Courtyard, the fact that it is within the purview of my district and within view of my personal office and within Judge Carter’s courtroom, that these things would be allowed to persist for a year without anyone coming forward to raise these issues with plaintiff’s counsel or me is ludicrous,” he told City News Service.

“Where has the ACLU been?” Do added. “If they’ve been sitting on this explosive information for year they could have easily voiced these concerns. Judge Carter is not one to ever limit anyone’s opportunity to raise concerns in his court.” 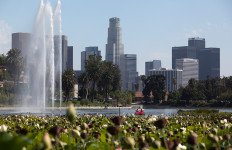