The Southland braced for two days of high winds and low humidity Wednesday, as forecasters issued warnings for extreme wildfire danger Thursday and Friday amid a week-long heat wave.

The strong Santa Ana winds and hot, dry weather were also prompting Southern California Edison to consider temporarily shutting off power for thousands of homes to limit the risk of accidental fires.

A red flag warning goes into effect at 5 a.m. Thursday until 5 p.m. Friday, according to the National Weather Service.

Winds are expected to begin picking up steam after midnight Wednesday, with the strongest gusts in the mountains and the Santa Clarita Valley. Sustained winds of 15 to 25 mph are expected, but gusts could get up to 60 mph, the NWS said.

In Orange County, 5,758 customers were under consideration for shutoffs in Irvine, Orange and unincorporated areas including El Modena, Trabuco Canyon and Robinson Ranch.

Firefighters were battling a 40-acre brush fire in Pacific Palisades that was 40% contained Wednesday. The 8,799-acre Saddleridge Fire in the northern San Fernando Valley was 97% contained.

Other expected highs Wednesday were 95 in Van Nuys and Pasadena, 96 in West Hollywood, and 93 in Anaheim and Valencia. 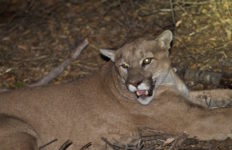