The Los Angeles Dodgers will face the Houston Astros in Game 1 of the World Series Tuesday at Dodger Stadium with a forecast that would make it the hottest known World Series game.

The temperature for the opening pitch at 5:09 p.m. is forecast by the National Weather Service to be 97 degrees. The unseasonably high temperature will be caused by a combination of Santa Ana winds and a strong upper-high pressure system, Andrew Rorke, a weather service meteorologist, told City News Service.

The hottest known World Series game is Game 1 of the 2001 World Series between the Arizona Diamondbacks and New York Yankees in Phoenix on Oct. 27, 2001, when the first-pitch temperature was 94 degrees and Major League Baseball ordered the roof at the then-Bank One Ballpark to be open, according to The Weather Channel, citing information from a blog by National Oceanic and Atmospheric Administration meteorologist Alex Lamers.

The Los Angeles Fire Department will assign additional personnel throughout the Dodger Stadium property because of both the heat and the potential for excessive celebration, the department’s Amy Bastman said.

“We are prepared for any additional need for emergency medical services,” she said, adding that the department will be poised to deploy additional personnel if needed.

“We hope for the best but prepare for the worst,” Lopez said.

Lopez also cautioned against driving while intoxicated and said fans going to the game should be aware of their surroundings and report anything that looks out of place.

Left-hander Clayton Kershaw, who will be the Dodgers starting pitcher, said he didn’t think the heat was “going to change anything.”

“They’re from Houston, I’m from Texas, it’s going to be hot for everybody,” Kershaw said. “We’re all used to it. It will be fine.”

The game will be the first World Series game at Dodger Stadium since Oct. 16, 1988, when Orel Hershiser, now a Dodger broadcaster, pitched a three- hit shutout in a 6-0 victory over the Oakland Athletics in Game 2 of the series, won by the Dodgers, four games to one.

Both teams will announce their World Series rosters Tuesday morning. The Dodgers roster is expected to include shortstop Corey Seager who missed the National League Championship Series because of a back injury.

Seager hit .273 and drove in two runs in the three-game sweep of the Arizona Diamondbacks in a National League Division Series.

Seager had the Dodgers second-highest batting average during the regular season, .295, was second in RBIs with 77, and tied for third in home runs with 22.

Dodger management is “sort of talking through” other changes to the roster, including “how we’re going to use the catchers,” manager Dave Roberts said.

Left-hander Dallas Keuchel will start for Houston. His 14-5 record was tied for fourth best in the American League.

Keuchel limited the New York Yankees to four hits over seven innings and did not allow a run in a 2-1 victory in Game 1 of the American League Championship Series Oct. 13.

In his most recent appearance Wednesday he allowed four runs and seven hits in 4 2/3 innings in a 5-0 loss.

Keuchel had two stints on the 10-day disabled list this season because of a pinched nerve in his neck and neck discomfort, sidelining him from May 20- 26 and June 8-July 27. 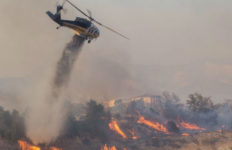