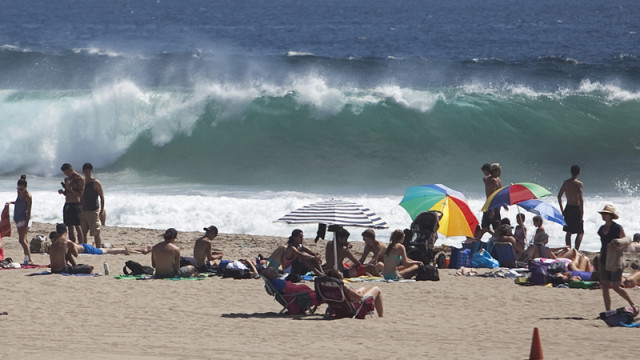 Hundreds of people were in the water at dawn in the South Bay and at Zuma Beach, and parking was scarce at favored breaks.

“Yeah, there’s a bunch of  people out there surfing. The surfing is good,” said Los Angeles County Lifeguard Simon Snyder at the Zuma Beach station. Adding to the crowds were relatively warm ocean temperatures of 60-63 degrees.

A dispatcher with the Manhattan Beach Police Department also reported no rescues Saturday.

“If you’re going to swim or surf make sure you check in with the lifeguard,” Snyder said. “They’re a lot of rip currents out there and in- shore holes.”

A high surf advisory remained up through 4 p.m. Tuesday, with the surf expected to build from 4 to 7 feet with local sets up to 9 feet today, according to the National Weather Service.

Surf was expected to be the highest in favored locations such as near the Ventura Harbor, El Porto and the west side of Catalina Island. Although surfers are usually happy to see rip currents, the NWS warned they could jeopardize people on rocks or jetties, and lead to “sneaker waves” and minor beach erosion in some places.