Southwest Airlines passengers waited in the heat and a long line of people at Los Angeles International Airport and at other fields across the nation Sunday, as a nationwide computer failure forced agents to issue handwritten tickets for all departing flights.

The airline confirmed the issue in an email response to City News Service, and asked all U.S. passengers to arrive at least two hours ahead of their scheduled departure Sunday.

LAX police tweeted out a photo of a huge line in Terminal 1, as passengers tried to make morning flights.

By 6:30 p.m. Los Angeles time, about 450 Southwest flights nationwide had been delayed, a Southwest spokeswoman in Texas said to City News Service. The airline operates 3,600 scheduled flights per day.

The airline blamed the delays on “technology issues, which are requiring us to process customers on their individual itineraries.”

The airlines issued a statement tonight that it was continuing to used backup systems to check-in passengers who arrived at airports without printed or mobile boarding passes. The airlines also has trouble shooters trying to nail down the problem in their computer systems which has caused this giant snafu.

Southwest is one of the busiest carriers at Los Angeles, Burbank, Orange County and San Diego airports. 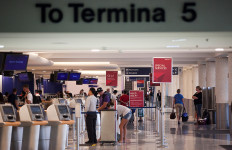