She said OK to sex with him, and even OK to being videotaped during the tryst.

Sergio Ortiz, 32, was arrested Sept. 1 by detectives from the Los Angeles Police Department’s West Valley Division Sex Crimes Unit, and was released six days later on bail. Ortiz is set to be arraigned Sept. 20 in Van Nuys on a misdemeanor charge of distributing private sexual images causing emotional distress. If convicted of the single count, Ortiz faces up to six months in jail and a $500 fine, according to the City Attorney’s office.

The LAPD, which released a statement Monday asking for help in locating additional potential victims, allege Ortiz uploaded “a video of himself and the victim having sexual intercourse onto an online pornographic website.”

“The victim did not agree to her image being uploaded onto the Internet and was only made aware of the video through a co-worker,” the LAPD statement says. “The victim is suffering tremendous emotional distress and humiliation at work, as well as among friends and family, after Ortiz posted the video of the two of them having sexual intercourse.”

Ortiz met the woman, whose name was withheld, through an online dating website, according to police.

“At some point, they mutually agreed to have sex together, and Ortiz took the victim back to his residence,” according to the LAPD statement. “While having sex, he began to video the victim who reluctantly agreed. However, the victim told Ortiz to delete the video afterwards. After the victim severed ties with Ortiz, he uploaded a video of them having sex onto an adult website without her consent.”

According to the LAPD, the investigation allegedly “reveals that Ortiz uploaded additional pornographic videos and images of other women, all of whom have not been identified. It is not known at this time whether these women consented to having these videos uploaded and made public on the Internet.” 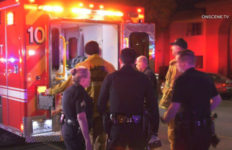