He died of natural causes Wednesday at his home in Santa Monica, according to an announcement posted on Twitter by his son, Logan, a news anchor at KUSI in San Diego.

“It is with profound sadness and grief that I share with you the passing of my father Edd Byrnes,” his son wrote. “He was an amazing man and one of my best friends.”

Byrnes shot to fame as one of the stars of the ABC series about two wisecracking private detectives and his character, “Kookie,” the parking attendance at their building — a “hipster” who was obsessed with combing his hair. The show aired for six seasons from 1958 to 1964.

The character’s popularity made Byrnes a teen sensation who received more than 15,000 fan letters a week and appeared on dozens of magazine covers.

It also led to the hit novelty song, “Kookie, Kookie (Lend Me Your Comb),” featuring Byrnes and actress-singer Connie Stevens, which reach No. 4 on the Billboard charts in May 1959 and earned a Gold record.

Apart from his signature role, the New York native appeared on dozens of television shows including “Murder She Wrote” and “Married With Children,” and a handful of movies. In “Grease,” he played Vince Fontaine, a smooth-talking Dick Clark-type host of a dance party TV show.

His son described his father’s story as that of “an ambitious young kid who in his 20s drove out to Hollywood from New York City with a few hundred dollars and a dream of making it big in the entertainment business.”

In addition to his son, Byrnes is survived by his longtime partner Cathrine Gross “and their beloved maltipoo” dog Marlowe. He was divorced from his wife of nine years, Asa Maynor.

Man Who Collapsed, Died During Scuffle with Border Agents ID’d→ 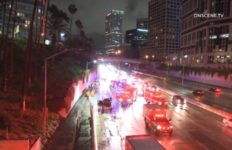