A 20-year-old World War II U.S. Marine from Los Angeles will finally be at rest in the United States when his remains are reburied Tuesday at Arlington National Cemetery.

Gov. Jerry Brown and First Lady Anne Gust are among those honoring Cpl. James D. Otto whose remains had been unaccounted for since he was reported killed in action in the Pacific theater in World War II.

His remains will be buried with full military honors, according to the U.S. Department of Defense.

Otto was assigned to Company L, 3rd Battalion, 8th Marines Regiment, 2nd Marine Division in November 1943 when he landed amid stiff Japanese resistance on the island of Betio in the Tarawa Atoll, officials said.

About 1,000 marines lost their lives and more than 2,000 were wounded over several days of intense fighting over the island and Otto was reported killed in action on Nov. 20, 1943, on the first day of battle, according to the Defense Department.

After the fighting, fallen U.S. servicemen were buried in battlefield cemeteries on the island.

Otto’s remains were not among those recovered from the island in 1946 and 1947 and on Feb. 10, 1949, his remains were declared non-recoverable by a military review board.

In June, however, the non-governmental organization History Flight, Inc. notified the Defense Department’s MIA Accounting Agency that it had found a burial site on Betio and recovered remains they believed were those of Marines who fought in the 1943 battle. The remains were turned over to the agency in July.

Lab analysis that included dental comparisons, along with circumstantial and material evidence led to the identification of Otto’s remains.

Otto was among the more than 400,000 Americans who died in World War II. About 16 million Americans served in the war.

Gov. Brown and his wife Friday extended their condolences to Otto’s family and friends and praised the corporal as one who “bravely gave his life in service to our state and nation … .”

Otto’s family also will receive a letter of condolence from the governor, who ordered that flags over the state capitol be flown at half staff. 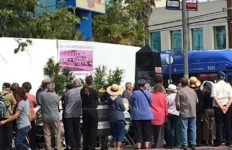