Bell died Friday in Pahrump, Nevada, Wehrly reported. An autopsy will be conducted to determine his cause of death, she said.

Bell’s show which aired coast to coast on some 500 stations at its height — including Los Angeles — focused on conspiracy theories, the paranormal, unexplained phenomena, including UFOs and crop circles. He served as his own producer, engineer and host as he broadcast his show from his radio station KNYE in Pahrump, according to the Las Vegas Journal Review.

Bell retired from the show in 2010 and its hosting duties were then split between radio hosts George Noory and George Knapp. Bell briefly resurfaced in 2013 to do a short-lived show on Sirius XM satellite radio.

Bell was mourned on Twitter by celebrities such as William Shatner and Josh Groban, who said he used to stay up late to listen to the show that was “weird and spooky but somehow managed to hold off your skepticism.”

Bell grew up in a military family and became an FCC-licensed radio technician at 13. He later joined the U.S. Air Force and started his own pirate radio station. 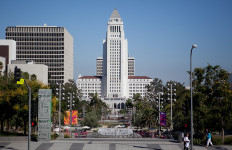