A bicyclist was struck and killed Sunday by a hit-and-run motorist driving an SUV in unincorporated Anaheim, and a chase across Orange County ended with a police shooting in Seal Beach.

The bicyclist was hit at about 5:30 a.m. in the 9500 block of Ball Road in Anaheim, the California Highway Patrol reported.

The suspect vehicle and its driver were chased across northern Orange County to Seal Beach Boulevard at Westminster Avenue, where the suspect crashed and then was shot at by a Seal Beach police officer. Police say no one at the shooting was injured and the suspect was arrested.

The incident began when a 2002 Ford Expedition driven east on Ball Road veered to the right and struck a bicyclist that had been going in the same direction, said CHP Officer Duane Graham.

The SUV driver fled in an unknown direction, and the bicyclist was pronounced dead at the scene, Graham said.

The coroner’s office was called there at 6:06 a.m.

“Anaheim (police department) subsequently and shortly thereafter came into contact with the Ford and a pursuit ensued,” Graham said.

“Our officers lost sight of the vehicle for a minute and when they found it again, it had crashed into a fence at Seal Beach Boulevard and Westminster in Seal Beach,” Wyatt said.

The pursuit ended in Seal Beach at 5:44 a.m., according to a CHP dispatcher.

“A responding Seal Beach officer discharged his firearm at the suspect as a result of the suspect’s actions,” said Michael Henderson, a public information officer with the Seal Beach Police Department. “There were no injuries to the officer or the suspect, and the suspect was taken into custody.”

Henderson said the hit-and-run was being handled by the CHP and the Seal Beach Police Department was conducting an investigation into the officer-involved shooting. 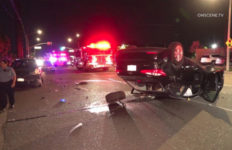