The average price of a gallon of self-serve regular gasoline in Los Angeles County dropped two-tenths of a cent Wednesday to $4.127, one day after rising one-tenth of a cent.

The average price is 5.1 cents more than one week ago and 33.9 cents higher than one year ago but 12.9 cents less than one month ago, according to figures from the AAA and Oil Price Information Service. It has risen 73.6 cents since the start of the year.

The Orange County average price dropped one-tenth of a cent for the second consecutive day to $4.086 after rising two-tenths of a cent on Monday. It is 5.5 cents more than a week ago and 35.3 cents higher than a year ago but 13.6 cents less than a month ago. It has risen 73.7 cents since the start of the year.

The Los Angeles wholesale gasoline price dropped 20 cents on Tuesday because “refinery issues appear to be resolved or on their way to a resolution,” said Marie Montgomery, a public relations specialist with the Automobile Club of Southern California.

“However, wholesale prices have increased by a net 50 cents since Oct. 25 so they probably have to decrease a bit more before we start seeing retail prices drop again,” Montgomery told City News Service. 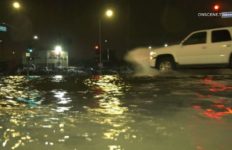