Rose Bowl Stadium officials are strongly recommending fans arrive at the stadium no later than 1 p.m. for Saturday’s UCLA-USC football game to avoid traffic-related delays and the potential for parking lots to fill up.

Carpooling, parking at the Parsons Engineering lot and taking a shuttle bus to the stadium or using public transportation is encouraged.

The stadium parking lots will open at 11 a.m. Shuttle service from and to the Parsons Engineering lot will begin at 1 p.m. and continue for 90 minutes after the games ends. The opening kickoff will occur shortly after 5 p.m.

A “strong law enforcement presence” is planned, involving local, state and federal agencies, according to the Pasadena Police Department.

Attendees are asked that if they see any illegal or suspicious activity to report their observations immediately to the Pasadena Police Department by alerting personnel on the scene or calling (626) 744-4241 for non-emergencies or 911 for emergencies.

There were three arrests at last year’s game between the crosstown rivals, which was played at the Los Angeles Memorial Coliseum. Two were for suspicion of  being drunk in public, Los Angeles Police Department Sgt. Sandy Cline said. It was unclear what the other arrest was for.

For the fourth consecutive year, the UCLA and USC athletic directors have issued a written appeal to fans asking them “to create an enjoyable, safe and respectful atmosphere for everyone in attendance.”

“Please remember that respecting those around you demonstrates respect for yourself and for your university,” UCLA’s Dan Guerrero and Pat Haden wrote. “While you alone are responsible for your actions, you can also set a positive example for others.”

Both teams enter the game with a chance of winning the Pacific-12 Conference’s South Division championship.

USC (7-3, 6-2 in conference play) needs a victory and Arizona State to lose at least once in its final two games to win the division championship.

Various oddsmakers have made UCLA a 3 1/2-4 1/2-point favorite. ESPN’s Football Power Index gives the Bruins a 58.7 percent chance of winning.

UCLA is seeking its first three-game winning streak over the Trojans since it won eight straight from 1991-98.

The Bruins are ranked 11th in The Associated Press poll, USC 24th.

The winning team will be awarded the Victory Bell, a 295-pound bell originally hung atop a Southern Pacific freight locomotive.

The bell was given to the UCLA Alumni Association in 1939. In 1941, it was taken by a group of USC students.

A year later, the student body presidents of both schools signed an agreement providing that the winner of the football game would keep possession for the next year, a tradition that has continued.

Two past Bruin football players will be honored at the game.

Each UCLA player will wear 42 on his helmet to honor legendary Bruin four-sport standout Jackie Robinson in connection with the 75th anniversary of his arrival at UCLA. The number, which Robinson wore when he played for the Brooklyn Dodgers from 1947-56, will be painted onto the field at the 25-yard line.

A video honoring Robinson’s legacy will be played during the first quarter break.

On Friday, UCLA announced that 22 athletic and recreation facilities would be named the Jackie Robinson Athletics and Recreation Complex and have the number 42 at each entry point as a reminder of Robinson’s tremendous courage as he broke Major League Baseball’s color line.

Robinson played both offense and defense for the UCLA football team in 1939 and 1940, leading the nation in punt return yardage in 1939 and 1940 and the team in rushing yardage, passing completions and scoring in 1940.

As a basketball player, he was the Pacific Coast Conference’s leading scorer in the 1939-40 and 1940-41 seasons. He also won the NCAA long jump championship in 1940 and played shortstop for the Bruin baseball team.

John Sciarra, UCLA’s starting quarterback in 1974 and 1975, will be honored in connection with his election to the College Football Hall of Fame.

Sciarra was a consensus All-American and seventh in voting for the Heisman Trophy in 1975 and the Player of the Game in the 1976 Rose Bowl when he helped lead the Bruins to a victory over top-ranked and undefeated Ohio State.

“I’m proud that he got recognized,” “NCIS” star Mark Harmon, Sciarra’s teammate in the 1972 and 1973 seasons and predecessor as UCLA’s starting quarterback, told City News Service.

“He could turn a mistake into a touchdown quicker than anyone I met in my life. He had huge tools. He was a leader.” 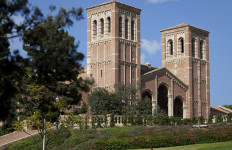