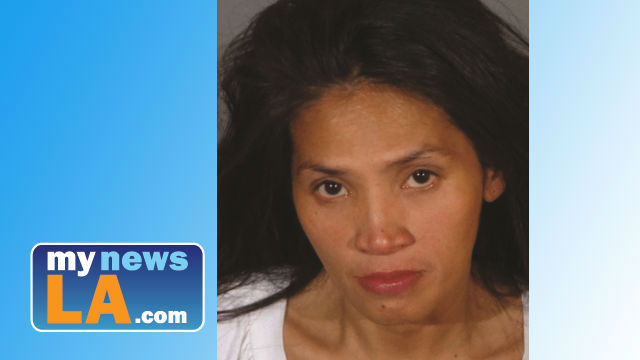 A woman accused of leaving her newborn son in a toilet at a Subway sandwich shop in West Covina was charged Wednesday with a felony count of child abuse.

Mary Grace Trinidad was booked late this morning by West Covina police after being released from Queen of the Valley Hospital, then transferred to the sheriff’s Century Regional Detention Facility.

Officers used a blood trail Monday to track down Trinidad, a 37-year-old transient, to a Pep Boys store in the same shopping center as the Subway, according to Officer Rudy Lopez of the West Covina Police Department.

Lopez said Trinidad, who used to live in West Covina, had a $30,000 narcotics-related warrant outstanding for her arrest. Sheriff’s Department records list several prior arrests.

It was not immediately clear when Trinidad would be arraigned. Prosecutors are asking that her bail be set at $100,000.

Police said Trinidad went into the bathroom of the Subway at 2540 S. Azusa Ave. and gave birth Monday morning. A trail a blood she allegedly left behind as she exited the business drew attention to the bathroom, Lopez said.

“Employees went inside and saw an umbilical cord hanging out of the toilet, then they found the baby in the toilet,” he said.

The baby was submerged in toilet water and crying, Lopez said. Subway employees and patrons cared for the infant, with help from 911 dispatchers, until paramedics arrived and rushed him to a hospital, where he was reported to be in stable condition, the sergeant said.

County Supervisor Don Knabe said the near-tragedy — at last report the infant was in stable condition — shows that more needs to be done to spread the word about the Safe Surrender program, under which the woman could have safely dropped the baby at any fire station or hospital and kept herself out of jail.

“Incidents like what occurred in West Covina are a stark reminder to mothers that there is always a better choice for their baby,” Knabe said Tuesday. “The Safe Surrender program was created to give a mother, no matter the circumstance, a safe, secure and anonymous way to get her child into safe hands.”

The program has saved 142 lives since it was launched in 2001, Knabe said.