Blumenfield said that after months of working with Los Angeles Unified School District, the Los Angeles Community College District and local activists from the West Valley Resistance, the school districts both approved implementation of the “Real Deal,” a training program for active-shooter and lockdown scenarios.

“The sad reality is that school shootings have reached epidemic proportions, and we need to take steps to make sure our kids are safe and not scarred by this horrific trend,” Blumenfield said.

King found that local schools didn’t have a consistent policy on how to train students in case of an active shooter on their campus.

“Students are only dying in schools from active shooters, and our schools and colleges are not prepared enough,” King said in a prepared statement. “We no longer have an alternative, but to train extensively and prepare our students, faculty and staff for the worst-case scenario. This cannot be about politics, division or taking sides. This is purely about saving lives.”

Beginning in the 2020-21 school year, LAUSD schools will be required to hold at least one lockdown drill each semester. Each school will also develop a plan to rapidly move students to a designated off-campus location when the campus is unsafe.

Last week, LACCD trustees passed legislation requiring “that there be a yearly test at each campus of emergency response and evacuation procedures, including appropriate drills, exercises and follow-through activities.”

“When a school needs to be locked down or evacuated because of a natural disaster, police activity in the neighborhood or threatened gun violence, our communities need to know that every student and adult knows what to do and has practiced what to do,” said LAUSD Board Member Scott Schmerelson, who named the legislation the “Real Deal.”

WVR members have been working to pass state legislation SB 541, introduced by state Sen. Patricia Bates, R-Laguna Niguel, to develop a policy for the entire state, but it was amended this legislative session from requiring the frequency of four lockdown drills a year to one. 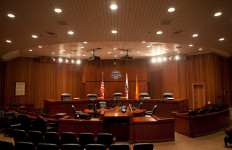 Coronavirus Emergency Declared In Orange County: Officials ‘Do Whatever We Can’→