Perez has been intervening in the talks this week in an attempt to help resolve the dispute, with federal mediators facilitating talks between the two parties.

The mayor joined Perez today, meeting with the Pacific Maritime Association, which represents port management, and the International Longshore and Warehouse Union, the representative for dockworkers.

The talks in San Francisco are expected to continue tomorrow, and while both sides are said to in agreement on major aspects of the contract — including health care and pay — there is still disagreement over an arbitrator who has a key role in determining how the future contract would be implemented and enforced.

Mayoral spokesman Yusef Robb said the mayor, who was due back in Los Angeles this evening, wanted to meet in person with the two sides to impress upon them “the stakes” of holding up trade at the ports, and to urge them “to continue operating all ports as effectively and efficiently as possible.”

The months-long labor talks have grown increasingly contentious in recent weeks, with the PMA issuing orders to halt the loading and unloading of ships at all West Coast ports during the past two weekends. The employers contend workers have been conducting an illegal slowdown that has driven down productivity, and they did not want to pay weekend and holiday salary rates for work that is not being done. The ILWU has denied any slowdown.

“We want to make sure we get to a fair and responsible contract that communicates stability to our customers,” Robb said. “Meanwhile, as negotiations are ongoing, we want to make sure our ports are running as efficiently as possible so customers aren’t seeing backups of ships on our shore and decide to take their business elsewhere.”

The fallout of the labor dispute was reflected in numbers released today by the Port of Long Beach that showed container volumes down in January by 18.8 percent compared with the same month last year.

A slump in the Port of Los Angeles cargo volume is also expected, with the numbers due out later this week, port spokesman Phillip Sanfield told City News Service.

“The Port of L.A. is not only a local, but a national economic powerhouse, which is why I’m up here, to deal directly with both sides,” Garcetti told KNX radio from San Francisco during a break in negotiations.

He said he is hoping to help move the two sides past a few lingering issues.

“We cannot wait any longer … we’re talking about 40 to 45 ships that can’t get into the docks — bring our shops what they need, get our workers on the docks,” he said.

As one of the “big landlords” in the shipping industry, with 70 percent of cargo coming through the Los Angeles and Long Beach ports, “we have much more to do together, if we move past this,” he said, such as investing in “those docks to make them cutting edge.”

Garcetti said Tuesday that due to the port dispute, not many goods are leaving the United States, while “imports are still coming in.”

He warned that with port customers contracting with competing Gulf Coast and East Coast ports, “trade may never come back if we don’t resolve” the labor dispute. 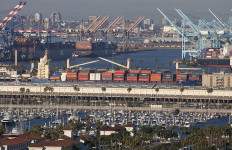