Noting that she’d been there many times — as a Comic-Con fan and movie star — Dawson said she’s seen seas of people there before, “but nothing like this. … This is about the 99 percent, too big to fail against the 1 percent.”

Scheduled to start at 8 p.m., the rally didn’t begin until 8:27, when TV and film star Dawson made a heart with her hands.

“You’re here because you’re talking to each other,” she said, and not at the encouragement of the Democratic National Committee. “We need you now more than ever. Youth has been on the right side of history on every issue.”

And: “If you want to beat Trump, vote Bernie.”

Listening was Dylan Souza, who wore a Pokémon outfit, including yellow headgear. But his presence wasn’t Comic-Con kid stuff.

If the Vermont senator doesn’t win the Democratic nomination, he said, “I’d probably end up voting for Elizabeth Warren” as a write-in for president.

Souza, a 24-year-old from Cypress (near Anaheim), wasn’t alone.

Among thousands cheering for Sanders were many jeering any mention of Hillary Clinton on a large screen showing CNN or MSNBC results of voting in Arizona, Utah and Idaho. At one point, a brief chant began: “Turn it off! Turn it off!” referring to the TV.

Teresa Whitney of Point Loma said: “I’ve loved Hillary a long time until she started taking all her money from big corporations. I love that Bernie is one of us.”

Whitney, 61, said she contributed to Sanders’ campaign “all the time.”

Sean Train of North Park, an Independent who last voted for Libertarian presidential candidate Gary Johnson, said if Sanders doesn’t win the Democratic nod, “my vote will end up going to a third party.”

Saying he wants to break up the two-party monopoly, the 30-year-old Train declared: “Now that we know fully and definitively that we live in an oligarchy, and no longer a democracy, we need someone radical like Bernie to flip things around and get us back on track.”

Wayne Peters of Pacific Beach, a retired San Diego City College and Southwestern College teacher who calls himself a cancer researcher, was unequivocal.

He said if Sanders doesn’t win his party’s nomination in Philadelphia, he “definitely” won’t vote for Clinton, and “it’s not going to Trump.”

“Doesn’t [Sanders] have the option to re-register as an Independent?” asked Peters, 68.

And another PB resident, John Nicksiz, had one big reason to oppose Clinton — her early support for the TPP — the Trans-Pacific Partnership trade agreement.

“I won’t vote for her,” he said, suggesting that the U.S. Chamber of Commerce expects her to again back TPP. “I’ll write Bernie in.”

Of a dozen rally-goers quizzed by Times of San Diego, only a handful said they’d vote for Clinton if she is the party’s standard-bearer.

But not enthusiastically, they said.

Sanders capitalized on such energy Tuesday despite CNN calling the Arizona primary for his opponent about 15 minutes before he began his standard stump speech.

He declared near the end of his 45-minute talk: “If there’s a large voter turnout, we will win in California” on June 7.

He got the usual laughs with: “I have been criticized for saying this, so let me say it again: I believe health care is a right for all people.”

But perhaps the biggest cheers from an estimated 8,800-person indoor audience came when he said his campaign would side with Latinos on immigration — and end what he called the exploitation of 11 million undocumented people.

Dozens of Secret Service agents were present for security, but no threats were observed — just a topless woman in the crowd.

“Well, when your nipples are #Bern ing, time to cool them off!” said a response to images posted on social media.

Backstage with @RosarioDawson. So nice to meet her last night in San Diego and have her support!https://t.co/G3bUijHe2k

This isn’t about political parties. It’s about us. Thank you Rosario Dawson and welcome to the political revolution! pic.twitter.com/b8rgZmVm11

Happening right now actress @rosariodawson talking/hugging it out with @SenSanders at a rally in San Diego. pic.twitter.com/n0DV5siTSV

Funny you should mention… https://t.co/RIx8MzRLCQ 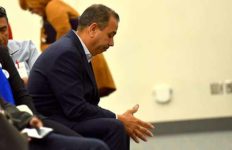 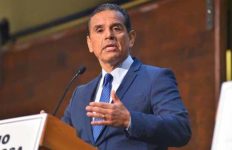 Villaraigosa Could Be in Billionaire Steyer’s Doghouse on Impeachment→ 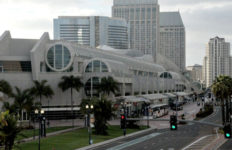