Oliver encouraged more of that — NRA members destroying their own personal property.

But the British comedian took his own hammer to the National Rifle Association’s media campaign.

Calling the web channel “Fox News on a much lower budget,” Oliver showed examples of NRATV, including a female-friendly show called “Love At First Shot” where firing an AR-15 was described as “a nice, light poof of happiness.”

Rolling Stone reported: “One hunting show includes nature scenes overlaid with brooding narration like ‘Somewhere over this horizon sit a million little dictators eager to purge humanity of its hunting instincts’ and ‘Death is an undeniable fuel of life.’ Oliver summarized the programming as ‘less Planet Earth and more ‘deranged letter from a serial killer.'”

Oliver said: “Think about it this way: If the NRA is a ferocious bear charging at you, NRATV is that bear’s ridiculous hat. Is it eye-catching? Sure it is. Is it perversely entertaining? Absolutely. Is the main thing you should be worried about? Probably not. Because the real truth here is: Hat or no hat, it is imperative that everyone keep their eyes on that — bear.”

Stinchfield himself said via NRATV’s Twitter handle: “@iamjohnoliver, thank you. You did such great job highlighting our work here.” (Last August, he gained attention by suggesting that North Korea bomb Sacramento instead of Guam.)

"@iamjohnoliver, thank you. You did such great job highlighting our work here." —@stinchfield1776 #NRA #LastWeekTonight pic.twitter.com/DtUNyRF5nc

John Oliver does a well researched and honest look at the NRA and the NRA responds by smashing a TV with a sledgehammer. That seems about right.

Why is @amazon still allowing @NRATV on their platform???

Go to @NRATV, check out their pinned tweet, and then tell me these lunatics aren't preparing for another Civil-War. 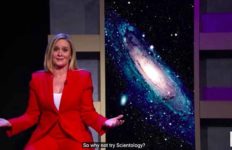 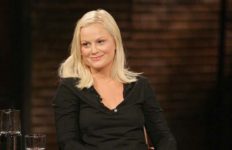 Amy Poehler’s shot at NRA hear ’round the world: (Expletive) off→